The Mask of Mirrors by M. A. Carrick 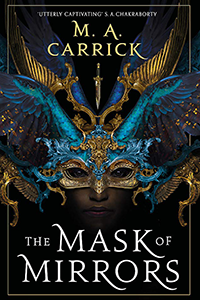 Title: The Mask of Mirrors

Ren is a con artist who has come to the sparkling city of Nadežra with one goal: to trick her way into a noble house, securing her fortune and her sister’s future.

But as she’s drawn into the elite world of House Traementis, she realizes her masquerade is just one of many surrounding her. And as nightmare magic begins to weave its way through the City of Dreams, the poisonous feuds of its aristocrats and the shadowy dangers of its impoverished underbelly become tangled…with Ren at their heart.

The Mask of Mirrors is the unmissable start to the Rook & Rose trilogy, a dazzling and darkly magical fantasy adventure by Marie Brennan and Alyc Helms, writing together as M. A. Carrick.

I think the more I think about this novel, the more I realise that I might have to re-read this one soon because the thing is, despite me not enjoying it as much as I thought I would, I keep thinking about it. That doesn’t happen a lot, if I am being honest. I keep getting those thoughts of awesome diverse characters and the complex intrigue about the world. Of course, it also has the not-so-awesome part of me not really feeling the world building as much as I wanted in the first part of the book and I wish I could have shaken off the feeling of disappointment enough to truly enjoy it for what the authors were going for.

Ren, the main character, is a con artist who decides to pretend to be one of the noble family members. It is for the sake of having better futures for herself and her sister. However as she steps into the world of nobles, she realises something. She might be involved in something far more dangerous than she might have thought. The family feuds and political intrigue is interesting and kept me interested to the part where I truly started to enjoy myself. Otherwise, the start was rough, it took me a while to find my ground in this one. It also didn’t help that I didn’t know there was a glossary list thingy at the end of the book and I didn’t realise it till I finished the book. Yeah, so save yourself and check out the glossary when in doubt.

I loved the characters, they had depth to them and they were very diverse. Not just in the loose sense of the word, yes, there were LGBTQIA characters but I meant personalities as well. It’s just so important that characters (all characters) shine through the book with their own personalities and this book certainly managed that in spades. There isn’t a single character that feels like a cardboard cutout, almost everyone has gray shades to them. I mean, the main character is a con artist who’s fooling people into believing that she’s noble. So, that sort of comes with the territory. I have seen a lot of people comparing this to Six of Crows and I would like to disagree with it. While it does have the morally gray characters and a con happening, it’s also vastly different. Six of Crows is a firmly YA book whereas this certainly does not or should be categorized as YA. It feels more adult than YA and that is its saving grace. If I had such a book in YA, I might have more unkind thoughts about it because unfortunately, whether I want to or not, there are certain expectations from YA fantasy that this one would not be able to deliver. I am glad for it. I love the other characters in the book too, I loved Tess and I especially loved Vargo. There’s a whole bunch of characters to love in this one and I can see why people would come to the conclusion of Six of Crow-ish but it’s different. I don’t know why I am yammering about this one point. Never mind me.

My biggest problem with this one was, pacing and world building. Despite being rich in description and just brilliant writing, I just couldn’t quite imagine it or felt like it was truly building up for me, you know? That’s the biggest thing I struggled with throughout the book. A book can be 700+ pages and still able to make me fall in love with its world and the pace can still be evened out. For me, the pace seemed glacial at times and then something would happen and then it would plateau again. A bit choppier than I like but that’s probably a me problem than a book or authors problem, really. However it lowered my general enjoyment of the book and part of the reason I rated it as low as 3.75.

Although I would definitely recommend it because 3.75 is still an awesome rating for a first in the series, I am definitely gonna be reading the next books if possible because the world is intriguing enough and the characters interesting enough that I would definitely spend hours lost in this world again.

One thought on “The Mask of Mirrors”