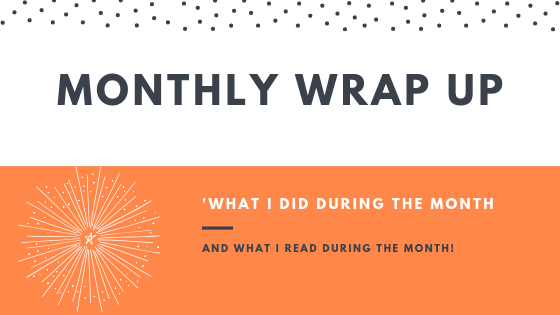 September was passed me by so fast and at times too slow. No, really. This month was weird in terms of pace of time but that’s fine because except for the weird pace of it, this month was fairly good to me and I am glad of it.

I think I was a better reader this month too! I didn’t read a lot this month but I did manage to read quite a lot more than I expected. Then there’s the fact that I posted more than the last few months. It’s always an uphill battle for me nowadays to make sure I am posting frequently enough.

And of course, to say nothing of the fact that I did a blog tour thing for the very first time in my life and I was super nervous and probably messed it up a bit, yeah, I did it. So, there’s that thing to be proud of.

Now, as I have already started talking about bookish things, let’s get into it, shall we? I first talked about the backlist books I had lying around my bookshelves and frankly, it was basically just me calling myself out for not reading them. And it clearly worked to a certain degree, okay? Because I read one book and I am reading another already!

Then I actually did a sort of a progress report of me reading the series I said I would read at the beginning of the year. Yep, another calling myself out post but this time, it was a positive one! I was and still am surprised at myself that I followed through on it as much as I could.

Series I Actually Read So Far

Then I started a bookish tag/ meme to talk about the books I am thinking of picking up or have already picked up. It’s a great way to interact more and update you guys of my reading at the same time. I hope you guys tell me more about your current reads too though!

Then I did a blog tour for the very first time and it might not have been the best but I did it. I was super nervous about it but I guess, it went okay? At least, nobody has come knocking and complaining which I count as a win, okay?

I am afraid I only wrote one more review during the week because I was busy reading, okay? (That’s my excuse and I am standing with it.)

A Matter of Interpretation by Elizabeth Mac Donald

The Pride Guide to the Occult by Leslye Walton

I really loved the atmosphere it created and while there was a lot I never really got but the sheer imagery and the writing made for those stars. Seriously, I can’t wait to read more from this author but I just wished I understood a bit more of what I read? Does that make sense? On one level I did understand but there was that sense that I was missing out on some other point that the author was trying to make?

A Matter of Interpretation by Elizabeth Mac Donald

Historical facts when mixed with fiction have been known to have disastrous results but in this one, it isn’t so.  The book has an interesting start,  a stone falls from the ceiling of a Sicilian hermitage and from there, it’s a ride. erall, I did thoroughly enjoy it because the plot and the characters do make it impossible to put it down and I can’t wait to read more from the author because the level of research and details in this one shone through. It made for an interesting and enjoyable read when it could have easily been otherwise!

Natalie Tan’s Book of Luck and Fortune by Roselle Lim

This was the perfect book for a commute read because it left me wanting for more with just a right amount of anticipation without wanting to finish it one go. There was whimsy and a touch of magic throughout everything that happened in the book. It really worked for me.

A solid start to a series that has all things I love! What more can a bookworm ask for? A YA dark fantasy, this story is set in the world where magic exists but only in certain artifacts and it isn’t the easy magic that we might be used to. This magic is very intentional and very dangerous and the main character along with the side characters are written so well. The pacing of the plot is also just right, too! Overall, can’t wait to read more of Kaylan, is all.

The City of Lost Souls by Cassandra Clare

I wish I loved this series a bit more but I am literally just trudging along so that I can get to the better books? Does that make me a bad person? I must say that it’s not a terribly bad book, it’s just that there’s only so much I can stand before I want to punch people in the story?

The Absolutist by John Boyne

This book was brought forward many feelings but the consistent feeling was that of being human. How very flawed and imperfect we can be and still be good. Also regret is a wonderfully cruel effect of actions that lasts decades if not entire lifetimes. I loved the reality of war and its effects on people and just….go read this book, okay?

To Be Taught, If Fortunate by Becky Chambers

This was my first Becky Chambers and I was so nervous because I have already bought all three books from her Wayfarers series and I just didn’t want to be disappointed with the novella I started with. I needn’t have worried because it was absolutely amazing and it was also the perfect commute book, too!! More thoughts will come your way very soon.

Ooh, this one was hard to rate because I think I read it at a really odd pace and that perhaps affected my rating and general enjoyment of the book. Horror and mystery was well done and I wish it was a bit longer but yeah, a solid 3.5 stars for this one.

That was September for me. I would say that overall, it was a pretty good month. I definitely read more diversely than I usually would. I actually wanted to read Clockwork Princess but somehow it never happened. Oh, well. Tons of time left for that.

Overall, I think in terms of quality, the books were fairly even. Each of them was pretty awesome in their own way! But if I had to choose a monthly favourite then I might have to go with either The Absolutist or To Be Taught, If Fortunate. Both of these were so freaking good in vastly different ways. Also something I want to read more of is the Relic trilogy, can I get the next book already?

What about you guys? What was your best read or the worst one? Or, let’s not call it the worst, let’s call it most disappointing read. Tell me all about it in the comments.

Till the next time!!!

2 thoughts on “September Wrap Up”