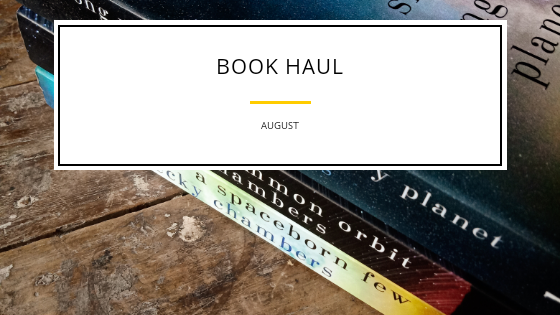 As is usual, I bought some books during the mont of August, luckily, there weren’t very many of them. Just four as a matter of fact. I debated with myself whether that counts as a proper book haul or not and then decided, yes, it does.

Any time a book is being hauled even a small number of them, then it is a haul. Also, I like bragging about my possessions and talking about new books that I hope to read ASAP. So anyway! Here’s the books I bought during the month of August. There’s only four of them and I don’t mind that at all. More books will come later. So, there’s that to look forward to and at least, I am not buying simply to get away from my anxiety. That’s always a good thing as far as I am concerned.

So, without further ado, let’s get started!

The Long Way to a Small, Angry Planet by Becky Chambers

The first in the Wayfarers series, I have heard nothing but great things about this one and I had been waiting for the prices to go to an affordable level for so long. As soon as they did, I snatched them off of Amazon. From what I understand, this isn’t hard sci-fi but more along the wholesome, found family way and I am very weak for that sort of thing. So let’s see how this goes.

A Closed and Common Orbit by Becky Chambers

So same reasons as above but also to add to them is the fact that this one was ridiculously cheap and I couldn’t risk not buying it so here it is. I have enough confidence that it won’t turn out to be a regret if I go by the summary. So, there’s that.

Record of a Spaceborn Few by Becky Chambers

Another reason, I bought them all together is because I like buying series together so that I can have the next one handy once I finish the first or the second one. Also, it seems that they can all be read as standalones/companion novels rather than a proper series? Not sure which one it is but can’t wait to find out!

The Lies of Locke Lamora by Scott Lynch

Then there is this one! Boy, oh boy. I have heard so much much and so many people absolutely love this one that I knew I had to read it. It is a bit different from my normal fantasy expectations and that’s a good thing. I need to branch out even in fantasy. Keeps things interesting, don’t you think?

So that’s it for the books bought this month, well, apart from the ones that aren’t here yet. Have you read any of the books? If yes, then, what are your thoughts on them? If not then after reading the blurbs, would you want to? Also, what was the last book you bought? Tell me all about it in the comments below.

One thought on “Book Haul- August”