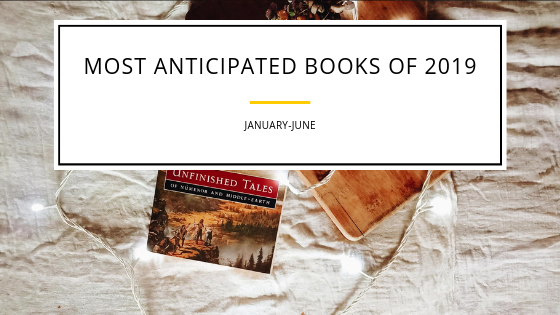 So, with the new year comes a whole new list of books that are coming out and some of them end up being our anticipated ones because of ‘n’ number of reasons. So, of course, seeing it everywhere else and being an original thinker that I am, I decided to share my most anticipated books of 2019 (January-June).

Now, they are not quite in the same order as being released because I kinda put them in my priority release order, i. e. I want them the most. So, here’s a list of all the books I am hoping will blow my mind. Mind you, there will be books that aren’t on this list but blow my mind anyway but those can’t be anticipated, they are a surprise sometimes, so, obviously those are not included.

King of Scars by Leigh Bardugo

After reading the entirety of Grishaverse with the exception of The Language of Thorns, I fell in love with the world Bardugo created and you can bet all your money on the fact that I legitimately screamed when I read that there was going to be a duology with Nikolai as the main character. I literally can’t wait to read them both the books to be honest but the first one will do for now.

Kingdom of Copper by S. A. Chakraborty

I took a long time to pick up The City of Brass last year but it was not in vain, that book was absolutely magical and a hell of a wild ride. Of course, I can’t wait to read more about the world and the characters of this world, are you kidding me?

The Winter of the Witch by Katherine Arden

It might be out everywhere else but it’s not released in India yet so I am still counting it as an anticipated read, okay? In any case, I read The Bear and The Nightingale in December, absolutely loved it and decided that I would read the last two books together because I want an immersive experience, okay? I might even read the first book again to get that much more immersion.

Neil Gaiman blurbed it, it’s been called “the African Game of Thrones”, I am not trying to hype it up because trust me, I know nothing much about this one except for what’s on Goodreads but it all sounds rather exciting and I just can’t wait!

The Priory of the Orange Tree by Samantha Shannon

I had the opportunity to read an excerpt from the book and boy, oh boy! This one has all the makings of a fantastic fantasy read. I mean it. I wish I had the book in my hands already!

Children of Virtue and Vengeance by Tomi Adeyemi

Even though the romance aspect of the book thoroughly disappointed me in Children of Blood and Bone, I was and still am pretty much in love with the magic system and the world of the Orïsha. So, I can’t wait to see more of the magic and the world in general, I am hoping that the romance wouldn’t let me down in this one because if it does then I might not pick up the next one, that’s for sure.

The Rosewater Resurrection by Tade Thompson

Rosewater was one of the surprisingly brilliant books I read last year, I was very confused initially but absolutely loved every moment of it as I finally caught on to things. I cannot wait to see what happens in this one and the next one. Tade Thompson‘s writing is so very, very good!

My Brother’s Name is Jessica by John Boyne

2018 was the year I finally read John Boyne’s books and I fell in love with his writing. He has such a way with words and his characters are so interesting that I just know I am going to love this one as well. From what I can gather, it’s about a transgender girl’s story told from her brother’s perspective. That’s an interesting approach and I hope it is as good as his other books!

Empire of Grass by Tad Williams

So, I have to admit something. I haven’t read the first book in this series nor the one before that so I am gonna be a bit clueless about it all but I read the original trilogy ‘Memory, Sorrow and Thorn’ and trust me, it’s so freaking good. I hope I get to read the books in this series as well. Also, this book releasing means I can binge read three books in the series, always a plus!

Children of Ruin by Adrian Tchaikovsky

When I read Children of Time, I was absolutely loved it! Adrian Tchaikovsky has such a unique and absolutely bonkers ideas and I am here for it, tbh. Can’t wait to read what he brings in next.

Cage of Souls by Adrian Tchaikovsky

I know nothing about this book but I am still here for it because of my experience with Children of Time, okay? Don’t judge me. Also that cover! That looks absolutely gorgeous, too.

The Quiet at the End of the World by Lauren James

When I read The Loneliest Girl in the Universe, I was absolutely not ready for what I was actually going to get and it was the best of surprises! Subverted tropes are the best when done well and that one was, so of course, Lauren James’ next book is on my anticipated list.

The Test by Sylvain Neuvel

After the whirlwind that was Themis Files, I am ready for whatever Sylvain Neuvel is bringing out next. This one sounds like it could be right up my alley, it sounds interesting as hell and I am hoping this one manages to impress me just as much as Themis Files did.

So, these are essentially the most anticipated books of 2019 (January-June) for now, mind you, I tried my best to include every one of them but I am human and I might have forgotten so forgive me for that.

Tell me about your anticipated books of 2019! Are any of those mentioned above in your list as well? I sure hope so because these seem pretty good to me but hey, different people different tastes and all that. So, I won’t mind at all if these aren’t for you.

Till the next time!