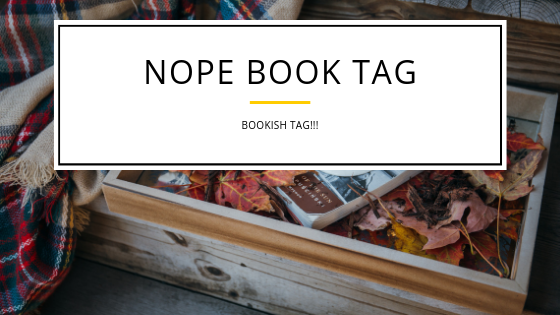 So, here I am! Back with another tag and you know exactly why so I won’t go into it. I came across this tag on Katie’s and Ashley’s ‘lost in pages’ and thought, I absolutely have to do this tag. I am not quite sure who was the original creator of the tag so I can’t credit them here however if you do know who it, please, tell me in the comments.

We have all come across books or series that once we read them, our only reaction was just one big ‘NOPE!’ and today I want to share some of my nope books! Yay, you get to know about some of my least favourite books, lucky you.

DISCLAIMER: Any opinions expressed in the post are just that opinions, if any of the characters or books are your favourites then please, don’t feel bad because I talked about them, it’s just an opinion and we can have different opinions, right?

1. NOPE Ending: A book ending that made you go NOPE either in denial, rage, or simply because the ending was crappy.

Can I still be in denial of the epilogue from Deathly Hallows? Because I am gonna list that here as the answer. Seriously, nobody needed that epilogue or the play that came after it. I am telling you I have some strong feelings.

2. NOPE Protagonist: A main character you dislike and drives you crazy.

I am gonna be really obvious here and say Bella Swan. I have such a problematic relationship with the series as a whole but one thing I will never deny is the fact that Bella Swan as a character and a protagonist is a big a nope.

3. NOPE Series: A series that turned out to be one huge pile of NOPE after you’ve invested all of that time and energy on it, or a series you gave up on because it wasn’t worth it anymore.

Grisha universe? Nah, I am kidding. The Maze Runner series? That one I can sort of say it wasn’t really worth the effort. I read the first two books in the series but seriously I almost DNF-ed the second book so that says a lot about the series. I haven’t yet watched the films but I have heard people saying it’s a bit better than the books.

Don’t @ me after saying this but I really don’t support Alina/ Darkling, that ship would have been toxic af and that’s me being mild. I understand the appeal of the Darkling, trust me, I am a huge fan of his character because he’s just so freaking intriguing and interesting and most importantly, multi-faceted. However he was not healthy for Alina and she might have been a bit good for him but no. Just no. (also, I am happy with the way series ended, too. )

5. NOPE. Plot twist: A plot twist you didn’t see coming or didn’t like.

The ending of The Book of M! I am still not sure why I didn’t see it coming but the fact remains that I didn’t and so, this is the book.

6. NOPE. Protagonist action/decision: A character decision that made you shake your head NOPE.

7. NOPE. Genre: A genre you will never read.

Possibly new adult? I mean, I don’t have anything against it but it just doesn’t seem like my sort of genre. Oh, well.

8. NOPE. Book format: Book formatting you hate and avoid buying until it comes out in a different edition.

I don’t really have a nope book format, however, I do admit to not being able to listen to audiobooks. It’s weird. I can listen to nonfiction books and audio lectures but I can’t seem to get into fiction audio books. It’s weird, I know.

9. NOPE. Trope: A trope that makes you go NOPE.

So many tropes, so little time. Pick any of the following and consider it one of my nope tropes : insta-love, love triangles, the chosen one (yes, I don’t like it but I also read it and sometimes it’s done but most times, not quite.)

10. NOPE. Recommendation: A book recommendation that is constantly hyped and pushed at you that you simply refuse to read.

ACOTAR or TOG books. I know. I know. It’s just there’s been so much hype and drama around these books that frankly, it has put me off. At this point, I can possible live without them without any problem whatsoever.

11. NOPE. Cliche/pet peeve: A cliche or writing pet peeve that always makes you roll your eyes.

When the female protagonist is always feeling as if she’s not pretty (brown hair, brown eyes and cherry on the top, brown skinned too!) (also, i am not saying that this can’t be the case but for that character to later be shown as gorgeous by the male character is a bit problematic for me) or she’s just average girl or god forbid, a nerd/ geek. Yeah, thanks, we have had enough of those.

Umm…any ship from Harry Potter series? I mean, the main ones anyway. None of them seemed possible lasting in the long term frankly speaking. Ron and Hermione??? And HARRY AND GINNY? PLease.

13. NOPE. Book: A book that shouldn’t have existed that made you say NOPE.

As much as I wanna try to answer, I can’t. I think every book should exist because if we start deciding which books should and shouldn’t exist, we are going down a dangerous road, my friends.

14. NOPE. Villain: A scary villain/antagonist you would hate to cross and would make you run in the opposite direction.

The Darkling. Or Melkor. Or Sauron. Or Voldemort? To be perfectly honest, I am 100% sure that any villain can kill me easily so. This question is sort of hard.

15. NOPE. Death: A character death that still haunts you.

SO MANY DEATHS! The one in Crooked Kingdom. That’s all I will say because

16. NOPE. Author: An author you had a bad experience reading and have decided to quit.

Hmmm…Stephenie Meyer? After the hell she put me through during the Twilight saga, you think I am gonna be reading more of her books? No, thanks.

So, there you have it. I am aware that Twilight featured far too many times but seriously, please, tell me it doesn’t deserve to be there. These statements come from a girl who still has her set of the series and who sometimes even reads the freaking books. Yeah.

Anyway, I am gonna tag a few people but if you haven’t done it yet and want to do it, consider yourself tagged!